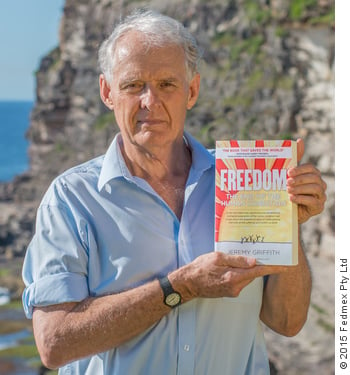 Jeremy Griffith with his book FREEDOM, 2016

A biology graduate of the University of Sydney, Jeremy Griffith first came to public attention for his unprecedented attempt to find the now believed extinct Tasmanian tiger (thylacine). However, it is his writing on the subject of the human condition that he is famous for, and it is these breakthrough insights, presented by the World Transformation Movement, that finally provide the psychologically rehabilitating understanding of our ‘good and evil’-afflicted human condition — the realisation of which, as E.O. Wilson recognised, has been the holy grail of the whole journey of human thought and enquiry.

Jeremy’s work has been described as ‘grand narrative’ in approach, drawing from the physical sciences, biology, anthropology, and primatology together with philosophy, psychology, and psychiatry. He cites thinkers from all backgrounds and eras, from Socrates, Plato, and Christ, through to more contemporary philosophers and scientists, such as Charles Darwin, Pierre Teilhard de Chardin, R.D. Laing, the Kenyan Louis Leakey, and the South Africans Jan Smuts, Eugene Marais, Olive Schreiner and Sir Laurens van der Post.

His 2003 book, A Species In Denial, became an Australasian bestseller, while in June 2016 his definitive treatment on the subject, FREEDOM: The End Of The Human Condition, was launched at the Royal Geographical Society in London, with renowned mountaineer, the Tanzanian-born Tim Macartney-Snape introducing Jeremy, and acclaimed humanitarian Sir Bob Geldof giving the keynote address.

It is important to note that by definition all new ideas threaten the status quo and are therefore typically resisted. And no new idea is as revolutionising and thus threatening of the status quo as analysis and explanation of the human condition. This is because the status quo, or prevailing attitude, has been to cope with the until now unexplained and thus unbearably depressing issue of our species’ seemingly horribly flawed, even ‘corrupted’ or ‘fallen’, ‘good and evil’-stricken human condition by living in almost complete denial of it. It follows that Jeremy’s explanation of the human condition will meet resistance and where that has occurred it has been strongly countered with rectifying clarification, which you can read about here.

Ultimately, understanding and absorbing the explanation of the human condition ends all the bewilderment, confusion and uncertainty — all the insecurity — about human behaviour. It unravels the whole mess we humans have been living in. Learn more about Jeremy Griffith and his breakthrough biological synthesis of the human condition here.